Minutes before half-time, Messi clashed with Gary Medel after the Chile defender had shepherded the ball out of play near his goal. The two players aggressively bumped chests a number of times before match referee Mauro Diaz de Vivar intervened and immediately flashed red cards for both.

The straight red marked the first time the Barcelona forward had been sent off in a senior game for club or country since a red in his debut with the national team against Hungary in 2005.

After the match, Messi, who didn’t collect his third-place medal with his teammates, tore into the officiating at the tournament, suggesting his red card was a result of his harsh criticism of officials following the semifinal loss against Brazil in which Argentina saw two penalty claims denied.

“It’s a play that happens a lot. [Medel] always plays to the limit. I think the referee overreacted. With a yellow card for both of us, everything would be over,” he said.

“I feel lot of anger because I think I did not deserve that red card because I think we were playing a very good game. We were ahead, but, as I said recently, unfortunately there is a lot of corruption, the referees. … We leave with the feeling that they did not allow us to be in the final, that we were ready for better. Brazil’s match and today’s match were our two best performances, but then when you are sincere, you say things and these things happen.”

Asked directly if his red card was a result of his previous complaints, Messi said: “Yes, unfortunately, yes. You cannot be honest, and you cannot say how things should be done.”

As a result of the expulsion, Messi faces a suspension for Argentina’s opening World Cup qualifier in March. He said he was not concerned about an additional ban for his strong postmatch comments.

“They can do whatever they want. The truth must be said,” he said. “I leave calmly and with the head high and proud of this group that gave everything and that was growing through the tournament.

“I hope that this group is respected and that people support them because they have a lot to give, as they showed in these games.” 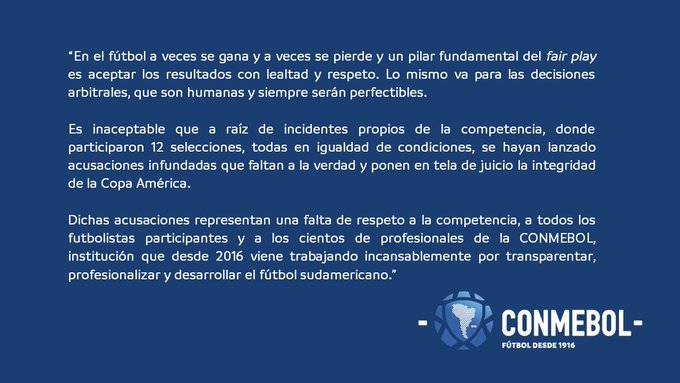 16.2K people are talking about this

“In football, sometimes you lose and sometimes you win. One of the fundamental pillars of fair play is to accept the results with respect,” the statement read. “The same applies for the refereeing decisions which are human and can always be improved.

“It’s unacceptable that as a result of incidents that are a regular part of competition, where 12 teams compete on equal terms, unfounded and untrue accusations have been launched that call into question the integrity of the Copa America.

“These accusations represent a lack of respect to the competition, to all the participating players and to the hundreds of professionals of the CONMEBOL, an institution that since 2016 has been working tirelessly to make transparent, professionalize and develop South American football. ”

Messi added that he fully expects hosts Brazil to beat Peru in the final on Sunday in Rio de Janeiro to lift their first Copa crown since 2007.

“I think there is no doubt. Unfortunately, I think it is prepared for Brazil [to win it],” Messi said. “I hope that the VAR and the referees have nothing to do and that Peru can compete because they have the team to win, but I see it difficult.”